2. GoodFella: My Autobiography by Craig Bellamy with Oliver Holt (Trinity Sports Media, 2nd May)
With beach season approaching, May sees the release of a bumper crop of autobiographies. Keith Gillespie, Alan Stubbs, Kevin Kilbane and Clarke Carlisle all have interesting things to say but Craig Bellamy would be my pick of the bunch. The Welsh forward is a love-hate figure and his colourful career is sure to contain a fair few juicy anecdotes. 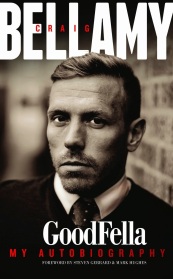 3. Stillness and Speed by Dennis Bergkamp with David Winner (Simon & Schuster, 8th May)
This highly original look at the Non-flying Dutchman’s career has already been longlisted for the Best Autobiography/Biography British Sports Book Award. Click here for my review.

4. The Manager: Inside the Mind of Football’s Leaders by Mike Carson (Bloomsbury, 8th May)
More Premier League bosses have been sacked this season (10) than in any previous campaign. In this thorough and insightful study, Carson speaks to 30 of the biggest names in football management including Jose Mourinho, Sir Alex Ferguson and Arsene Wenger to find out what it takes to succeed.

5. Futebol: The Brazilian Way of Life by Alex Bellos (Bloomsbury, new ed 8th May)
There are plenty of books looking to cash in on World Cup fever this summer (most notably David Goldblatt’s Futebol Nation) but this updated classic is the one-stop shop for all matters Brazilian. The detail is astonishing, yet it’s also as entertaining as the players themselves. 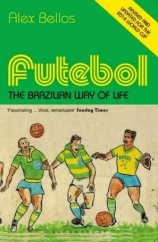 6. The Numbers Game: Why Everything You Know About Football is Wrong by Chris Anderson and David Sally (Penguin, new ed 5th June)
It seems it’s not just books about Brazilian football that are getting a summer makeover. Inverting the Pyramid, Jonathan Wilson’s definitive history of tactics, has been brought up to date and this stats myth-buster has a bright new jacket and a World Cup chapter. Prepare to have your view of the beautiful game changed forever.

7. Fear and Loathing in La Liga: Barcelona vs Real Madrid by Sid Lowe (Yellow Jersey, 7th Aug)
A great title for a great book about a great rivalry. Spanish football expert Sid Lowe gives us the full and bloody history, both on and off the pitch. Politics, culture, economics, language and of course football – tension and drama as far as the eye can see. Click here to read John Mottram’s review.

8. The Nowhere Men: The Unknown Story of Football’s True Talent Spotters by Michael Calvin (Arrow, 14th Aug)
Ever wondered how the likes of Jack Wilshere and Raheem Sterling were discovered? This fascinating look at the hidden world of football scouts tell you everything you want to know about the sport’s unsung heroes. One of 2013’s most highly-acclaimed sports books.

I Think Therefore I Play

By Andrea Pirlo with Alessandro Alciato 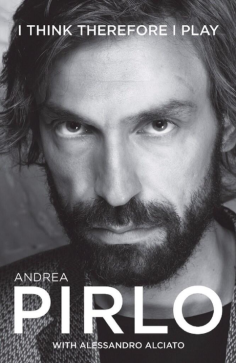 A love of Woody Allen and cinema in general; an appreciation of ‘philosopher’ as ‘a nice compliment’; the secrets of great free-kick taking; ‘I’ll sometimes come home after training, light the fire and pour myself a glass of wine.’ These are the kind of insights you’d expect to glean from the world’s classiest footballer. You won’t be disappointed but Andrea Pirlo is not a man to rush things, or to sell himself short. So instead of the comfort of the lounge, I Think Therefore I Play begins at the negotiation table of a Milan office. It turns out l’architetto is everything you knew and loved, and much more.

Don’t be fooled by his graceful, unruffled appearance on the pitch; Pirlo is made of tougher stuff. A ruthless ambition reveals itself early on in the discussions surrounding failed transfers to Real Madrid, Barcelona and Chelsea respectively. He may have spent a decade at AC Milan, through great times and later more mediocre ones, but Pirlo is no Steven Gerrard. On each occasion these top European clubs came calling, the midfielder had very little hesitation in putting his own success over any sense of loyalty. This is true even in 2006, with Milan facing the threat of relegation during the Calciopoli scandal – ‘one thing I was sure of, though: I would never drop down to Serie B.’ You could almost be forgiven for thinking it was Zlatan talking, the man Pirlo brilliantly describes as ‘a ticking timebomb of a madman’. Andrea’s eventual departure in 2011, to rivals Juventus, seems to have been as seamless off the pitch as on it. I Think shows a fully-fledged convert, a die-hard Juventino, although consecutive Serie A titles certainly helped the transition. Where Rossoneri leaders Silvio Berlusconi and Carlo Ancelotti are shown affection in passing, Antonio Conte and Andrea Agnelli get their own laudatory chapters.

The ‘Olympic torch deep within’ Andrea Pirlo also comes as something of a surprise. An intense patriotism shines throughout I Think, from the Cesare Prandelli introduction right through to thoughts on his imminent retirement. In his own words, he’s ‘an Italy ultra’ with a ‘pathological devotion’ to the Azzurri. Not that at club level he’s any less passionate or determined. Defeats weigh heavily, not least Milan’s disastrous collapse in the 2005 Champions League final versus Liverpool. Pirlo reflects at length on suffering from ‘insomnia, rage, depression, a sense of nothingness’ for weeks. Winning the same fixture two years later isn’t enough; ‘we celebrated but didn’t forget’.

Don’t let the grave face on the book jacket fool you, though, because Andrea knows ‘how to laugh, loud and long’. He’s a self-confessed pirla (dickhead), and his pranks on teammates, especially Rino Gattuso, make for brilliant reading. Humour might not be something you really expected from Pirlo but what a pleasant surprise it is to find it on every page. I Think is as quotable as Anchorman: ‘When you win, burping takes priority’, ‘after the wheel, the Playstation is the best invention of all time’, ‘It’s called an assist and it’s my way of spreading happiness’, ‘much better to be a soldier on the pitch than in the bedroom’…

But then just when you think you’ve got l’architetto nailed as just one of the lads, he reveals ‘an opinion about everything’. I Think contains Pirlo’s concise but considered thoughts on a wide range of footballing issues, including racism, technology, doping and betting. Some remarks suggest genuine oratory skill; on the subject of fan violence, Pirlo argues that Serie A is ‘way behind, and we don’t seem to realise that the further we fall, the deeper and narrower the well has become’. And even Paddy Agnew would be proud of Pirlo’s metaphor for Italy – ‘I saw the inner workings of a motor car that was imperfect, full of defects, badly driven, old and worn, and yet still utterly unique.’

Co-author Alessandro Alciato and translator Mark Palmer deserve great credit for making I Think what it is – a highly entertaining footballing autobiography that foregrounds the character of the player in question. The narrative reflects the engaging, informal style used by David Lagercrantz for I Am Zlatan, but goes one step further in avoiding all attempts at chronology. Instead, with its short, sparky chapters, I Think resembles a series of loosely connected fireside chats, the natural environment for a cultured raconteur like Pirlo. And with at least two more Serie A titles won and one last World Cup this summer, here’s hoping for a second instalment. After all, as Alciato says in his Thanks, ‘when he starts talking, there’s no stopping him’.

The Miracle of Castel di Sangro 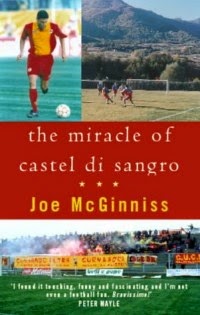 There are many things I’d trust my brother with but a book recommendation wouldn’t usually be one of them. Yet around the turn of the century, in between Dan Brown-type thrillers and Poirot-lite whodunnits, he read an intriguing book about an American who spent a season in a tiny Italian town following the fortunes of a lower league football team. To this day, it remains his favourite book – he even faked Joe McGinniss’ autograph on the title page of his well-thumbed copy. Sadly, in my ignorant snobbery I consigned it to the slush pile alongside the great literary works of Ashley Cole and Wayne Rooney. Oh, the mistakes of youth.

How times have changed. Now I can’t stop reading football books and I celebrate McGinniss, God rest his wonderful soul, as a hero in the Hornby tradition. A brilliant writer delving deep into an obsession – surely that’s the noblest of pursuits. Like all the sporting classics, The Miracle of Castel di Sangro is about a whole lot more than a game. It may start out as a footballing endeavour – from Roberto Baggio at World Cup 1994 to remote Abruzzo and a ‘miracle’ journey all the way from C2 to Serie B – but it soon becomes apparent that ‘the ninety minutes of calcioplayed each Sunday were having less and less to do with my experience of Castel di Sangro’.

Instead, it’s about the many characters he meets along the way: the mysteriously silent owner Pietro Rezza, the sharp-tongued manager Osvaldo Jaconi, the team’s mother and number 1 fan Marcella, and that’s without naming a single player. And they, after all, are the leading actors here, displaying the kind of dignity and spirit that superstars can only dream of. I can’t begin to do them justice here but as promotion hero Pietro Spinosa tells McGinniss, ‘a squad like this – and I speak not of talent but of the cuore e grinta e carratere … this is once in a life, and once only … And for you, Joe, to pass the season among these kinds of men – quello è il vero miracolo.’

Alongside character in spades, there’s Hollywood-style action. Castel di Sangro contains all the elements of a page-turning thriller; it’s a will-they-won’t-they rollercoaster ride with subplots of corruption, sex, drugs and death. But then this is Italy, where football and power are bedfellows, with the Mafia reigning supreme over mere mortals. And where a hotel can completely close for a day and a football team can play half a season without a home stadium. Many of the books most interesting and entertaining sections show McGinniss coming to terms with ‘the richness of the life I led as a stranger in a strange land’.

Or attempting to, anyway. One thing McGinniss is not is a shrinking violet; having left his family behind in America for a year of unadulterated obsession, he expects answers to even the most difficult of questions. This brave, partisan stance makes for brilliant reading, as he harasses his neighbour Jaconi about the negative tactics and stubborn team selection, and confronts club president Gabriele Gravina about the misuse of funds. But despite the frequent farce surrounding him, McGinniss never loses his sense of humour, or ‘la potenza della speranza’. For every day of disillusion, there’s an equal and opposite moment of exultation. This is a book about football, after all.

Castel di Sangro is the kind of story you never want to end, showcasing football at its humane best. To quote defender Luca D’Angelo, ‘Serie B – never a dull moment except during the ninety minutes of the match!’ A film could never do it justice, but McGinniss certainly has. My eternal thanks to him and, of course, to my brother.