Publishers are like bloodhounds when it comes to surprise success. And it’s not really a survival of the fittest scenario, either; instead, it’s the more the merrier. At least seven books have been published, or are being published, about Leicester City’s extraordinary, title-winning season. Do we need them all? Which one is the best? I offer no answers but here’s a quick look, in chronological order, at each one: 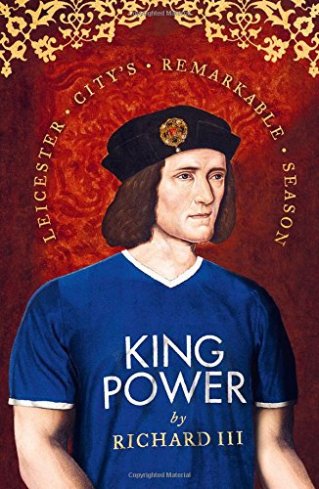 Author: Supposedly King Richard III but in truth, I have no idea

Verdict: An early wildcard but the response has been good. ‘A bit of fun’, one Amazon reviewer calls it.

Title: 5000-1 The Leicester City Story: How We Beat The Odds to Become Premier League Champions

Format: A month-by-month look at the season from a journalist who saw it all.

Verdict: The early bestseller, timed to perfection like a Jamie Vardy run.

Title: Jamie Vardy: The Boy From Nowhere – The True Story of the Genius Behind Leicester City’s 5000-1 Winning Season

Format: the Jamie Vardy story, told from birth to glory

Verdict: Perfect for the impatient but if you’re looking for a little more insight, wait a little longer (see below) 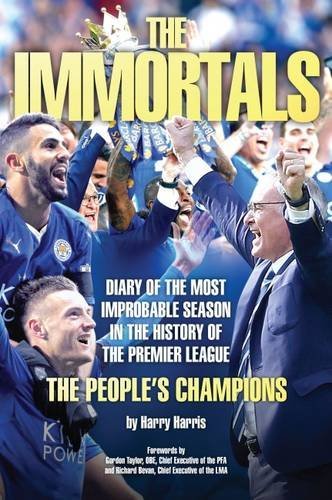 Format: Each month of the season gets a chapter of its own and there’s a section of results and stats at the ends

Verdict: A classic Harry Harris book – not very pretty or insightful but certainly comprehensive. A bit like Robert Huth, I guess.

Title: The Unbelievables: The Amazing Story of Leicester’s 2015/16 Season

Format: match-by-match diary entries interspersed with trips into the club’s past

Endorsements: There are quotes from Ranieri and Lineker on the back cover but I don’t feel that they refer to this book specifically.

Verdict: Told by a fan, for the fans. And the Dave Williams cover artwork is sensational. 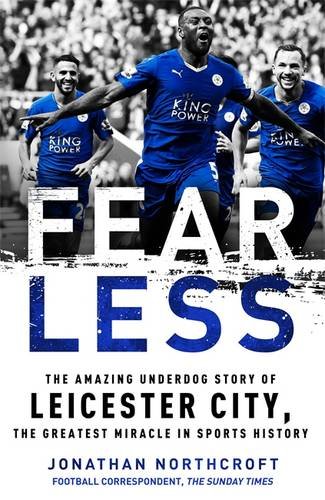 Format: ‘Fearless will document Leicester’s hunt of their impossible dream. It will tell the greatest football tale of the Premier League era, in loving detail, with the inside track. Now that Leicester have gone all the way and won the title, it is the best story in world sports – for years.

Premier League champions. The side who’d been adrift at the bottom 12 months previously, who’s started the season as relegation favourites, whose manager was favourite to be the first one sacked once the campaign got underway. A League One side only seven seasons previously. A squad of £500,000 and £1m men. Leicester. Ridiculous. Miraculous. Fearless.’

Verdict: Now that the confetti has settled, this is the one that everyone is waiting for. This promises to be an engaging and insightful book by one of the best in the business. 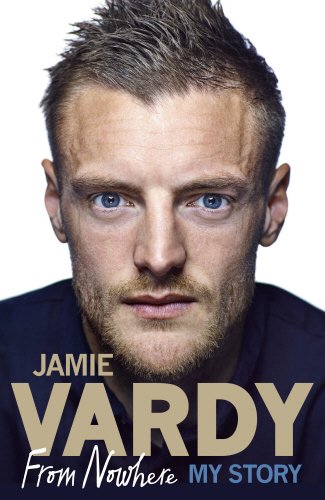 Author: Jamie Vardy, and rumour has it that there’s no ghostwriter in sight

Format: ‘The incredible story of Jamie Vardy’s rise from non-league journeyman to Premier League Champion in his own words.’

‘Make his/her face as big as possible – that’s what sells!’ That, I imagine, is a reoccurring comment in publishing houses around the world. I doubt a designer’s eyes have ever lit up at the words ‘Football book’ but the likes of Ronald Reng’s Matchdays, Raphael Honigstein’s Das Reboot and Jonathan Wilson’s Angels With Dirty Faces show what a bit of thought and effort can achieve.

So what about (auto)biographies? What can be done to spice things up, to make the often forgettable contents within that bit more bearable? I’m no expert but here are a few things to consider:

1. Action Shots
Lionel Messi is a footballer – he plays sport on a pitch wearing either the light blue and white stripes of Argentina or the azulgrana of Barcelona. I don’t know about you but I don’t want to see him posing in the locker room wearing plimsolls.

Duncan Ferguson was a footballer – he played in blue for Everton and loved shouting at everyone, including referees. 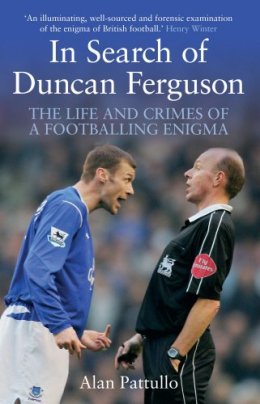 2. Colour
I’m all for a bit of black and white when it comes to classic players like Pirlo and Bergkamp. But you know it’s gone too far when Keith Gillespie is getting in on the act.

The halfway house is a horrible beige. They might suit the supermarket shelves but Rio and Stevie have never looked so dull.

I’m pretty sure I’ll never read Didier Drogba’s autobiography but at least it looks a little enticing (although back to my first point about his outfit).

3. Fun
This might not suit every player but it’s perfect for the likes of Bullard, Parlour and Dudek. Sometimes you’re just looking for some good stories and a bit of a laugh. 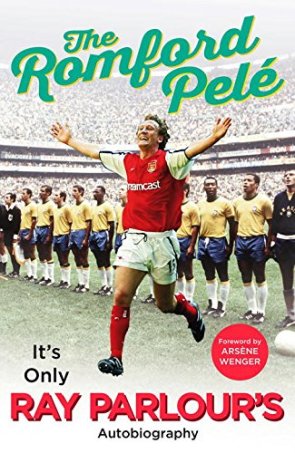 4. Not Just a Pretty Face
Sometimes (Keith Gillespie, for example), it’s not all about the looks. It’s about the bigger picture, and Big Sam means business.

Here’s where we step into uncharted territory. What if we took a picture of a player in action and added some tasteful, colourful flourishes like you would see on most other books? I’ll leave you to ponder that.

As I hinted back in April, May was a great month for football book releases. Here are my thoughts on two of those titles, plus an earlier gem:

Reading this book ahead of Euro 2016 was like watching Christmas music videos in early December. The tales of Terry Venables, Gazza and co filled me with naïve hope once again that football might indeed come home. It’s a story that many of us are very familiar with but Gibbons gets the content just right. Old favourites like the dentist chair are wheeled out once again, alongside less famous details. England’s matches are explored in detail but not too much detail and the myths surrounding the team’s performances are neatly dispelled. ‘Euro 96 became a sugar-coated memory…The 4-1 win over the Netherlands was the high point, but they could easily have gone into that game under the pressure of having two points or less.’

The cultural backdrop of Tony Blair, Oasis, Blur and Northern Ireland is neatly tied in without taking the focus away from the boozy brilliance of the football itself. In terms of tone, the book reaches for Pete Davies’ witty reportage in All Played Out and gets close. It’s a very enjoyable whizz down memory lane. Now that England’s tournament is over and in such spectacularly underwhelming fashion, When Football Came Home reads like beautiful chaos, which beats limp resignation any day.

First of all, Fitzcarraldo Editions make truly gorgeous books and this is no exception. Now for the ‘but’. To start a book with ‘This is a book that no one will like, not intellectuals, who aren’t interested in football, or football-lovers, who will find it too intellectual’ is a very bold move. It takes a perceived divide and attempts to widen it. Having finished the book, I can agree with the author but not for the reason offered. Football-lovers won’t like this book because Toussaint isn’t much of a football fan and this book isn’t really about football. 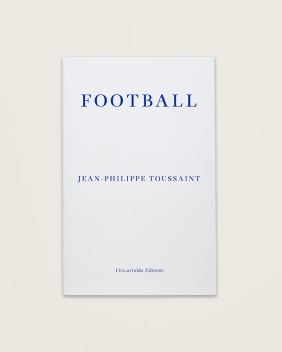 Instead, Football is a book about ‘melancholy, time and childhood’ that happens to touch on the beautiful game from time to time. And when it does, it is dismissive and offensive. There is some eloquent, philosophical writing in the book, especially ‘Zidane’s Melancholy’, but take the following statements: ‘the football of adults leaves me cold’, ‘in Europe, most football supporters are male, violent, racist, full of beer or wine’, and ‘I’m starting to get a bit fed up with football. I prefer poetry’. For Toussaint, it is ‘vulgar, coarse and perishable matter’. In my experience, football fans welcome intellectual writing that takes a deep and critical look at the sport. Too much of this, on the other hand, is shallow and offensive.

I know it’s early to talk about the Best of 2016 but I’ll be surprised if many books this year can compete with this exceptional story of ‘football’s lost genius’, Adrian Doherty. Doherty was an Irish wing wizard some thought was better than Ryan Giggs, who loved poetry and music as much as, if not more than, football. But just as he was on the verge of the Manchester United first team, Doherty’s career was tragically ended by injury.

Kay narrates this extraordinary tale with warmth and care, offering fascinating detail about Manchester United’s youth team during the late 1980s-early 1990s revival, as well as the treatment of injuries during this time. Kay deserves real credit for his brave, investigative style; no stone is left unturned and he refuses to cower in the long shadows cast by Manchester United’s modern empire.

If there must be a criticism, mine would be that at over 400 pages, the book is a little long. In trying to include so many different player testimonies, Forever Young becomes repetitive in its conclusions: Doherty was an incredible and unique talent, an outsider that everyone liked but few really knew. But ultimately, like the player himself, Forever Young is an extremely welcome breath of fresh, eccentric air.