Paul Dickov, Dean Windass, Clive Mendonca – you’ve gotta love the Football League play-offs. Richard Foster loves them so much that he’s written a very good book about them – The Agony & the Ecstasy (Ockley Books, 2015). The origins, the stats, the winners and the losers – they’re all there and more. I caught up with the Guardian journalist to talk all things play-offs.

1. At what stage did you decide to write the book and how did you approach Ockley about it?

I actually had the original idea about ten years ago. I had always been intrigued by the Play-Offs and following initial research was amazed that there was no book dedicated to telling the story behind them and so the journey started.

Having just finished my first book, The A-Z of Football Hates I had an offer from that publisher for the Play-Offs history but was introduced to Ockley by another author. I was impressed by Dave Hartrick’s enthusiasm, knowledge and most importantly, his emphasis on the quality of the writing.

2. What was the hardest part of the writing process?

Firstly, having written a fair chunk, around 20,000 words, I had my Mac stolen and stupidly hadn’t backed it up so that was a major setback. I could not go back to writing it for a year or two, as it was too painful. So that was a tough lesson learned – always back up your work.

Secondly, writing a history is a tough challenge as every year things change and I toyed with the structure for ages. The biggest decision was whether to go down the strictly chronological route or a thematic approach, in the end it turned into a mixture of the two.

3. There are lots of great tables, stats and infographics throughout the book. Was that the plan from the outset?

I must admit that I am a sucker for stats and I had always thought that a dedicated Play-Offs table would be a good idea. But it did take a lot of toing and froing between Dave Hartrick and myself to come up with the final formula and, as a Brighton fan, he was not especially enamoured by the idea of Palace being the top Play-Offs team.

The infographics are the work of design genius, Mick Kinlan, who did an amazing job transforming all the facts that I dug out about each and every club that have competed in the Play-Offs into such a visual feast. My personal favourite is the Bristol clubs being linked by the Clifton Suspension Bridge. Class.

4. There are lots of insightful contributions from player, managers and fans. Was it hard work collecting these or were people very eager to discuss the play-offs?

Almost universally everyone I approached was more than willing to be interviewed about the Play-Offs and could recall the minute details of their experiences, which convinced me that this was a worthy topic for a book. There was one manager, who shall remain nameless, who asked for money to be interviewed, suffice to say, he is not included in the book.

5. Putting aside your beloved Palace, what is your favourite play-off memory?

There are so many to choose from but as a neutral I would have to say that the Huddersfield Town Sheffield United penalty shoot-out in 2012 League One Final takes some beating. Uniquely, all twenty-two players took a penalty and the last one by Steve Simonsen was perhaps the most inglorious failure and dramatic and heart-breaking ending of them all.

6. What are your predictions for 1-6 in the Championship this season and who do you think will win the play-offs?

Middlesbrough, Hull, Burnley, Brighton, Sheffield Wednesday and Ipswich. Fate decrees that Brighton will win the Play-Offs this year as consolation to my publisher for having to stomach Palace topping that Play-Offs table.

7. Would you be in favour of a Premier League play-off for the fourth Champions League spot?

I am with Sir Alex Ferguson on this one, which is not a phrase I use that often. I think it would be a little too artificial and considering the bleating that goes on about too many fixtures for the top clubs this would add fuel to the fire.

I like the fact that the Play-Offs give the Football League clubs the stage upon which to showcase the excitement and drama of their season finale. All eyes are focused on the lower divisions for those Finals and that is a good thing that should be maintained.

You can buy The Agony and the Ecstasy here

The first few months of the year tend to be a pretty barren time in sports publishing. We’re reading our Christmas presents, we’re watching football on TV and we’re saving money in every way possible – these are the sales theories. I can’t speak for everyone but I find myself crying out for new books by February. Thankfully, Pitch Publishing read my mind and they’ve served up a real winter warmer: George Rinaldi’s Calcio’s Greatest Forwards. It hit the shelves on 15th February and the author was kind enough to answer my prying questions.

1. So how does a 20 year-old go about getting a book contract?

Ha! Well I turned 21 two days before release but we’ll pretend I’m still 20 for my own sake! It was an odd experience in all honesty. I always wanted, from a young age, the chance to write a book whether it was fiction or non-fiction. For some bizarre reason at the tail end of my gap year I started putting things into place to make a self-published book, so I did a bit of research around that and then started writing it. What I wasn’t aware of was that when people pitch their books to publishers that most, if not all, of the book was already done! I was handed a contract with about 15,000 words on the table out of a targeted 80,000! It was tough work but I really did put so much effort into this. I wanted something to replicate my work for years to come.

2. Why did you pick forwards? Why not Italy’s most famous creation, the defender – Baresi, Maldini, Cannavaro? Or is that the next project?

Oh good question. I thought first of all that maybe a mixture called “Calcio’s Greatest” would work, with say 20 odd players from all positions, but forwards just have that certain interest pinned to them. I wanted people to know about Gunnar Nordahl and Silvio Piola in the same way Alessandro Del Piero and Francesco Totti are seen. I may choose to do another with extra players who missed out or revise it at a later date.

3. 21 is an odd number to pick! You mention in the introduction that 20 was the target. Who was the one that you couldn’t quite let go?

Well, I had it all signed off with 20 players originally and had to crack on with that due to time restraints. I didn’t want to, say, add 25 players but those extra five weren’t properly researched like the rest. It would have felt rushed, and not worthy for people to read and learn of. I worked out, with the time I had, I could do the 20 I wanted. There was no one I could let go but I had a time window for both myself and the illustrator (Josh Clifford) to get one more done. So I made sure Marco van Basten was there, as I’d stupidly not included him! 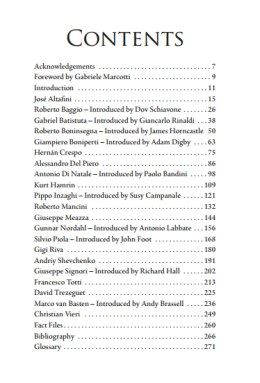 4. And in a similar vein, who was Number 22, just missing out on the final cut?

Ronaldo, George Weah, Omar Sivori and John Charles. They were the four, bar Luca Toni, who I just couldn’t keep over the others, even though some value Ronaldo as above pretty much all of them. I felt more has been done on Ronaldo elsewhere though, and I thought the ones I picked gave a good mix. I did want Weah, but I didn’t have the time. Sivori and Charles came down to the fact I had Boniperti, and they crossed over very closely. I’d have done Charles alongside him, but again time was the issue.

5. What was the hardest part of the writing process?

Probably the extensive research into publications from La Gazzetta dello Sport, La Stampa, Corriere della Sera etc. They have some wonderful pieces from the early stages of Serie A, but finding the right source to access them was tough. I had to exchange a variety of e-mails to get those as close to factually correct as someone can do in that situation. I even debunked a few myths on Giuseppe Meazza, which I was quite proud of regarding his goalscoring stats.

6. The illustrations – the Steve Welsh cover, the Josh Clifford portraits, the Paine Proffitt images – are a great touch. How did that come about?

Steve was my aim from the off. I had seen his work everywhere and I loved his Roberto Baggio illustration. We came to an agreement for the cover and he took my long-winded e-mail and managed to craft it into my image. Paine was kind enough to allow me to use his work for free, having asked him to do the nostalgic paintings for the players pre-1970. He’s a wonderful man and his work is of the highest quality, it was too good a chance to pass up. As for Josh, it was very fortunate on my part. One of my friends knew Josh, and asked me to send him an e-mail to show me what he can do. He did two practice ones – Meazza and Totti – and they were incredible. They all work seamlessly together which was a nice surprise! 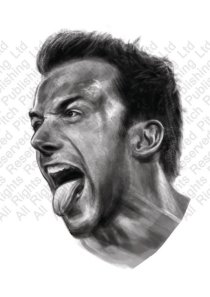 7. Why do you think so many of the attackers featured either never left Italy (Totti, Inzaghi, Del Piero) or did but failed to reach the same heights (Shevchenko, Crespo)?

Well, sometimes your home is your home. Totti came down to his mother’s wishes, and with Del Piero and Inzaghi it’s just where they were comfortable. Remember, they were playing at a time when Italian football was probably the best league in the world. It wasn’t really until the tail end of noughties the league curtailed somewhat. Because of that, it’s why players like Edinson Cavani moved on, same goes for Zlatan Ibrahimovic. Italy isn’t what it was. It can return to its former glories at some point, but I doubt it’ll ever be what it was.

In regards to Sheva and Hernan, I think a lot of people forget that Crespo actually had a decent goals-to-games record for Chelsea. For Andriy it just didn’t work out for him. He worked wonders for Kyev then at Milan, but the move to England saw his decline. It wasn’t just the climate or the new league to adjust to, considering he went back to the Rossoneri and was then voted the flop of the season.

8. If you could write a whole book about just one of Serie A’s 21 finest attackers, who would it be?

Gigi Riva, all day every day. This man went through the works to achieve his greatness with Cagliari. He lived in poverty, had his parents snatched from under his nose and still went on to guide his side to their first and only Scudetto. There’s so much more to tell, and if I could do so, I would, but like Valentino Mazzola I don’t think my words at this stage could do him justice!

9. And finally, who do you predict will be the next great Calcio forward?

Tough one. Paulo Dybala has what it takes to be one of the best in recent years since his move from Palermo but it depends how long he’ll last at Juventus. Even being a Fiorentina fan, I hope it’s for his entire career, as his sort of talent can attract some good names over to L’Italia. As Crespo said, Messi and Ronaldo don’t want to step foot in Serie A. We must change that. We’ll try our best, Hernan.