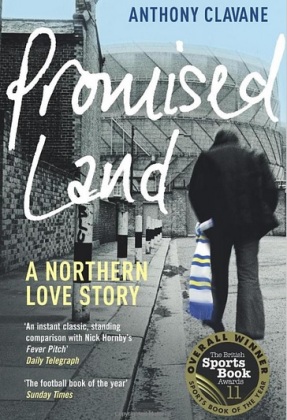 For all the acclaim and attention, there remained a sad and predictable note to the reception for this ‘Northern Love Story’ four years ago. The Daily Telegraph compared it to Fever Pitch, The Sunday Times called it ‘the football book of the year’ and there was even praise from The Damned United author David Peace. Unfortunately, what these excellent associations did was pigeonhole a book that was always about a whole lot more than sport. Promised Land is a set of interlocking, coming of age tales: the story of a city, Leeds, alongside the story of the book’s Jewish author. The story of a football club – Leeds United – forms the third side of the triangle, the binding baseline of the equilateral. Incorporating politics, culture, literature and religion, Promised Land is the best expression of the game’s communal significance that you’re ever likely to read.

While Clavane’s engaging personal narrative is woven throughout, it’s never as self-centred as Hornby’s. A crucial balance is upheld between the subjective and the objective, between the love letter and the social investigation. Rather than the central theme, Clavane’s journey through adolescence is rarely more than a narrative tool to transport the reader from a to b to c to d to e. Because in little more than 250 pages, Promised Land takes in more than 50 years of British social history. In fact, if we include the early section on his ancestors’ arrival in England, that figure becomes 110. Such scope requires the tightest of structures and the most focused of analyses. The governing principle of Promised Land is this; ‘United’s peaks and troughs over the past fifty years have coincided with the peaks and troughs not only of the game itself, but also of the city of Leeds and its Jewish community.’ Simple, shrewd, succinct.

Promised Land is arranged around four key time periods: Don Revie’s side of the 1960s and the meteoric rise of the Northern Man; the decline and degeneration of post-1975 Britain, dominated by ‘the three Rs – the recession, the Ripper and the racism’; the early 90s revival of both club and city; and finally O’Leary and Risdale’s ill-fated attempt at Premier League domination, just as the city too ‘squandered its boom money on insipid, gimmicky projects’. In amongst this chronological progression, Clavane’s study sweeps deftly across the years: ‘Cantona, like Johanneson and Clough…epitomised the flamboyance and sense of adventure Leeds had always failed to accommodate’, ‘It had gone the way of all other Leeds dreams, from Brodrick’s – through Revie’s – to Risdale’s.’

The result is a convincing, overarching argument for Leeds’ ‘nearly-man inheritance’. 1975, 1992, 2001, 2011 – ‘at the most crucial moments in their history, just as they were about to close in on their pinnacle, they have, quite simply, blown it’. Beautifully crafted and meticulously researched, this final reckoning rings loud and true. Clavane is in his element, combining the authority and precision of the historian, with the passion and obsession of the football writer. Promised Land is at its absolute peak when placing the two eras of Revie’s reign (‘Dirty Leeds’, then ‘Super Leeds’) within the context of the post-war regeneration of the north.

The book concludes with a backwards timeline inspired by the ‘seven sabbaths of years’ prophesised in Leviticus. It’s the football writing equivalent of Ulysses and forms a fitting finale to what is a hugely ambitious and innovative study of everything Leeds; football and everything before, during and after.