I Am Zlatan Ibrahimović

‘It was a fairy tale, and I was Zlatan Ibrahimović.’ If you’re looking for a book that confirms everything you thought about the modern football mindset, this may well be it. There are fast cars, tattoos, video games and fights (Van der Vaart, Zebina, Mijhailovic, Onyewu to name but a few) galore. Of his Ajax, Inter Milan and Barcelona teammate Maxwell, Zlatan admits, ‘I’m surprised he got to be so good. Guys that nice don’t usually make it in football. You’ve got to be tough and hard’. ‘Hate’ and ‘revenge’ are words that occur again and again here; Zlatan’s story is one of thriving on the former and striving after the latter.

It might not surprise you to hear that Zlatan can ‘bear incredible grudges’; against the middle-class parents who started a petition to get him ejected from his youth team, against the Malmo management who cheated him out of money in his Ajax transfer, against every reporter who’s ever condemned him, against the Swedish team for sending him home from international duty, against cowardly Guardiola who ‘destroyed my dream’. I am Zlatan is packed with Godfather-style tales of retribution – ‘I don’t forget … I remember, and I get my own back’. There are several sizeable chips on Zlatan’s shoulder, not least his class/ethnic background and his relationship with his one-time alcoholic and distant father (‘I’d been trying to get attention all my life’). The wronged victim stance gets a little hard to stomach at times (on arrival at Ajax, he’s too poor to stock his fridge because he’s spent it on a Mercedes) but it’s all part of the man, the myth.

As is the money. ‘A footballer’s career is short’ he philosophises. ‘He’s got to look after his own interests.’ I am Zlatan covers five transfers (not including PSG) and is at its most fascinating when dealing with Ibra’s role in proceedings. The significance he attributes to them is striking; ‘There’s one game on the pitch. There’s another on the transfer market, and I like them both’. With the help of his mafioso agent, Mino Raiola, Zlatan pushes for transfer after transfer – from Ajax to the bright lights of Italy where ‘footballers are gods’, from Serie B-condemned Juventus to superstar-less Inter, from Champions League-less Inter to Spanish giants Barcelona and then from Messi’s Barcelona to superstar-less AC. There are mind-games aplenty; for his move to AC, Zlatan tells Barcelona that he will only sign for rivals Real – ‘the idea was that those guys would become so demoralized, they’d have to let me go cheap, which would help us get a good personal contract.’

Money, fame and success are the priorities, and in larger quantities than anyone else. ‘Everybody’s interested in the one who’s number one’, we’re reminded again and again. Zlatan chooses Inter over AC first time round because he doesn’t want to play second fiddle to Kaka, while if we read between the bitter lines, Barça doesn’t work out because of their no-star philosophy. In case you hadn’t realised, Zlatan isn’t exactly a model ‘team player’ – he wants teammates in the way a general wants an army behind him. Just as he looks to have bucked the trend at Inter by bonding the club’s many cliques, he tells you he negotiates an improved contract in return. The book is full of record boasts, whether it be transfer fees, goals scored or the number of Barca fans that turned up for his unveiling. He emerges as a figure who isn’t exactly hard to please, just expensive and tiresome.

But is there anyone who Zlatan doeslike? Without spoiling too much, Ronaldo and Van Basten emerge as heroes, while Maxwell, Thierry Henry, Patrick Vieira, Henrik ‘Henke’ Larsson and Olof Mellberg are players he trusts and respects. In terms of managers, Fabio Capello and Jose Mourinho are the two that emerge unscathed and, in fact, adored. Capello is credited with developing his ‘winner’s mindset’ during his spell at Juventus, while at Inter Mourinho was ‘a guy I was basically willing to die for’. With Capello, it’s the mental toughness that Zlatan admires but with Mourinho it’s the added personal touch that wins him over.

Because for all the posturing, Zlatan is a figure who needs to be loved. The ambition to entertain is as key on the page as it is on the pitch. You don’t read this for the historical detail (in the Bosnian War, his father’s town ‘was being raped, more or less’) or the insider’s view on the Juventus match-fixing scandal (‘we were the best and had to be brought down’). You read I Am Zlatan for the cult of ‘Ibra’, for the prima donna antics and boastful lines like ‘An injured Zlatan is a properly serious thing for any team’. As much as it’s a fairy tale, it’s also pure pantomime.

A Life Too Short: The Tragedy of Robert Enke 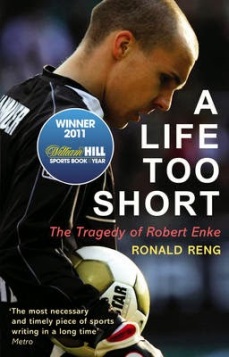 ‘He could only lose … if everything went as planned, Barca would win 3-0 or 4-0 and no one would mention the goalkeeper. If it went wrong, he would get the blame.’ It’s 2002 and Robert Enke’s Barcelona debut, a Copa Del Rey tie against minnows FC Novelda. It’s his first chance to impress but in the new surrounds of Spain, under pressure from manager Louis van Gaal to conform to Barca’s sweeper-keeper tactics, the German keeper is too anxious to see the positive side. What follows is one of sports writing’s greatest chapters. Lower league journeyman Toni Madrigal scores a hat-trick in his team’s historic victory over the La Liga giants. Enke isn’t solely culpable for any of the 3 goals he concedes and yet defender Frank de Boer breaks ‘an unwritten law in professional football: never criticise your team-mates in public’. And thus begins his first bout of depression.

Explaining why A Life Too Short surpasses other sporting biographies is simple; it’s the absorbing, larger-than-sport story of a talented and likeable individual, told by a skilled writer with an intimate understanding of his subject matter. As such, it’s a brilliant and unique proposition, a winner by default. What’s more important to convey, therefore, is why this book is quite so significant in a wider context. It’s the twinned themes of sport and mental health but it’s more nuanced than that, a question of tone and perspective.
Reng narrates the tragedy of his great friend with gentle comprehension and understated emotion. In other, more Hollywoodized hands, Enke might have become the greatest keeper that ever lived, a saint between the sticks. Instead, he is a sensitive and sometimes flawed human being, a highly talented but not unimpeachable footballer, ‘a warm-hearted person who believed that humility isn’t a bad character trait, even for a goalkeeper’. With its blend of psychological detail, anecdotes and interviews, A Life Too Short has a remarkably personal feel. Reng is greatly assisted by Enke’s diary-keeping and his intelligent and perceptive self-analysis. When the crowd cheers a great save during his comeback at Tenerife, Enke offers an important reminder of the motivational bond between player and supporter – ‘That was what I missed most, that feeling that what you do is important for somebody’. Elsewhere, he confesses to close friend Jörg, ‘Football turns you into someone who always wants more, who’s never content.’
Rarely have the mental pressures of sport been laid so bare. Early on we’re told that Enke ‘developed a mechanism for turning inner nerves into outward peace. Only very rarely did the mechanism break down.’ At Borussia Mönchengladbach, he concedes 15 goals in 2 games and yet rises above the chaos with dignity and composure. He even copes with a difficult transition to Portugal at the tender age of 21. But when this mechanism does break down, the effects are devastating. Following the Novelda episode, Enke notes in his diary, ‘All the self-confidence I built up in three years at Lisbon has been taken away from me.’ He can’t stop playing the errors over in his head and becomes terrified of his perceived weakness for crosses. Ultimately, he lacks the mala leche that maintains the likes of Victor Valdes and Oliver Kahn; anxiety consumes him. As his close friend Marco Villa puts it, ‘If all you have is football, and it goes wrong, you’re left with nothing but doubts.’
The subtle grip of the narrative is such that it’s possible to forget the tragic conclusion we already know. You’re rooting for Enke as he rediscovers his love for the sport at Tenerife and then Hannover, as his performances earn him a recall to the national side and even the coveted No.1 jersey. You worry about his mental stability but with a loving wife, close friends and a baby daughter, it’s hard to see what can go so horribly wrong. But that, in a way, is the message of the story. Depression is an illness that hits suddenly, often without an obvious trigger. It leaves you physically and mentally exhausted, reducing the mind ‘to a tiny crack through which only negative impulses could slip’, and yet a sufferer can still struggle through their daily life without letting on. Until, that is, they see suicide as the only escape from the darkness. ‘Perhaps this book will do something to help depressives find more sympathy and understanding’, Reng says in the epilogue. A Life Too Short’s myth-busting insight into the tragedy of Robert Enke will achieve this and much, much more.