Thierry Henry: Lonely at the Top: A Biography 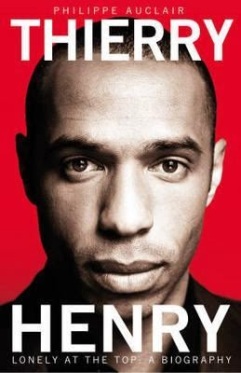 A sports biography that strays beyond the sporting facts is something to celebrate. A sports biography that prefers to call itself ‘a biographical essay’ and sets out ‘to try to understand how and why such a magnificent footballer…has inspired such extremes of feeling’ deserves a piñata and party bags. For Auclair, this is no empty threat; what he did for Eric Cantona (The Rebel Who Would Be King), he’s now done for Thierry Henry, the classy King of Highbury but also ‘the selfless egotist, the insufferable charmer, a walking oxymoron in shorts’. It’s another fascinating subject matter for a brilliantly incisive biographer, especially one who happens to be an Arsenal-supporting Frenchman living in London.

Yes, Philippe and Titi are a match made in heaven, even if, despite years of interviews and conversations, the journalist is ‘not a friend of his, and could never have become one’. Does distance make the heart grow fonder? In Auclair’s case, it makes the heart grow fairer, and more intrigued. Rightly or wrongly, Henry’s every word, gesture and decision is scrutinised here, from Les Ulis prospect all the way through to New York celebrity. Lonely at the Top addresses the need for an objective judgement of France’s highest ever goalscorer, an examination of the myths side by side: Henry the player and Henry the person.

1 French, 2 English and 2 Spanish league titles, 1 Champions League, 1 World Cup and 1 European Championship. Surely the trophy cabinet of a true footballing legend? And yet, Henry remains a ‘nearly man’ in many eyes; no ‘single moment’ to define him, no Ballon D’Or win and famously only 1 goal in the 9 major senior finals he played in, that one being the 2003 Confederations Cup. ‘He still owned them [the trophies] but he didn’t seem to ‘own’ them, somehow’. As Auclair’s chronology demonstrates, either side of the dizzy heights of his Arsenal career, Titi never quite lived up to expectations at Monaco, Juventus and even Barcelona (a ‘parenthesis’ according to his biographer). For France, Henry’s goal record hid the disappointing fact that he and Zidane failed to gel during their peak period, at the 2002 World Cup in particular. In terms of the ‘genius’ tag, an adopted nonchalance disguised a footballer working hard to get the most out of a raw blend of pace and power.

And yet, between 2001 and 2004, Henry was unstoppable. As the focal (and significantly central) point of Wenger’s ‘Invincibles’, Titi led the Gunners to 2 Premier League and 2 FA Cup trophies, winning back-to-back PFA Player of the Year awards. In these 3 seasons, he scored a phenomenal 103 goals in 155 matches, including many that were crucial and/or breath-taking. He won the French Player of the Year award four years in a row (2003-6), and was runner-up in the FIFA World Footballer of the Year in both 2003 and 2004. Paradox Number One: Henry the footballer.

Paradox Number Two: Henry the man. The infamous ‘Hand of Gaul’ against Ireland in 2010 only served to reinforce his reputation as an arrogant and unlovable individual. Auclair and others speak of ‘a many-sided man’ with a ‘calculating streak’, ‘increasingly aloof’ and renowned for his ‘essential remoteness’. No-one argues with Monaco and Arsenal teammate Gilles Grimandi’s assertion that Henry has no real friends in football. Patrice Evra, Robert Pires and David Trezeguet come close but don’t quite make his very exclusive inner circle. Lonely at the Topastutely traces Henry’s near-universal distrust back to a difficult relationship with his demanding father and a botched transfer to Real Madrid in 1996. This early betrayal, Auclair argues, ‘hardened him’.

And yet, Henry has never shied away from the cameras. He gave regular interviews throughout his time in England and, like most footballers, what he said was always polite, usually humble and occasionally insightful. In 2008, Premier League fans voted him their most popular player ever. So how does this all add up? What we have, Auclair argues, is a highly insecure figure who ‘craved assent and praise as no other footballer I have come across did’. In his dogged pursuit of greatness, Henry adopted a public mask, surrounding himself with propagandists and ‘starfuckers’ in an attempt to control his image. A very convincing argument indeed.

While Henry is, of course, the focus of Lonely at the Top, the bigger picture is always intricately filled in. The Clarefontaine, Monaco and Barcelona set-ups are discussed in detail, while the ebb and flow of Henry’s time at Arsenal is given the attention it deserves, as he graduates from struggling misfit, to leader of champions, and finally to one-man team. Arguably the book’s most fascinating sections, though, cover Titi’s rollercoaster ride with Les Bleus, from World Cup winners to shamed, first-round knockouts in the space of 12 years. Auclair lays out the national context boldly and succinctly; ‘a fractured society ridden with post-colonial guilt and neuroses, which had desperately wanted to believe in the 1998 black-blanc-beur utopia and was now forced to smell its own shit.’ Biography this may be, but like Henry at his pinnacle, it’s a few cuts above the rest.