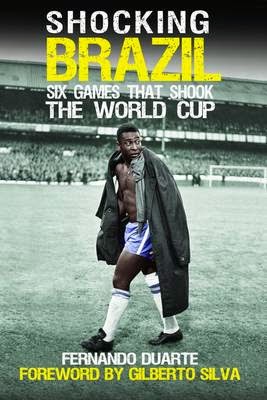 Modern non-fiction is often as much about reinventing the wheel as it is about offering the reader new information. As simplistic as it is to say, facts are facts and once they’re known, they’re known. So new authors shuffle the existing pack before (fingers crossed) revealing a hidden ace or two: a modern perspective perhaps, a more accessible tone, and hopefully some unique insight and testimony. In Shocking Brazil, regular Guardian contributor Fernando Duarte lays down all three as he traces the history of Brazilian football through six of its biggest World Cup disappointments: 1950, 1966, 1974, 1982, 1998 and 2010.

Focusing on the losses may seem a fairly negative angle to take, especially for a Brazilian native. However, Shocking Brazil doesn’t feel pessimistic; instead the approach is realistic with patches of optimism. Rather than ignoring the Seleção’s well-known history of success – 1958, 1962, 1970, 1994 and 2002 – the narrative celebrates this by detailing the setbacks that led to these triumphs. The result is a necessary and successful reconfiguration of Brazilian footballing history; as Duarte puts it, ‘The losing stories are a significant source of untapped information on the development of the game.’ Would Pele and co. have gone on to win back-to-back titles if it weren’t for the Maracanazo in 1950? Would Ronaldo have played as well in 2002 if he’d won it in 1998?

With its ‘tales of mismanagement, corruption and chaos’, Shocking Brazil highlights the recurring obstacles and distractions that the Seleção have faced over the years. The fascinating ‘political intrusions’ that hindered the 1950 and 1974 sides may have subsided somewhat in recent years, but they’ve been replaced by equally demanding sponsors and contracts. As expected, Duarte is at his most enlightening when dealing with these more recent, and less-discussed, events, including conspiracies linking Nike to Ronaldo’s 1998 breakdown, and Dunga’s battle with the Globo media empire in 2010. Written with the informal charm and wry humour of a die-hard fan, these sections feel as vibrant and fresh as Neymar Jr himself.

What the book so brilliantly conveys is the multiple layers of politics at play in Brazil, and the massive disruptions they can cause. Historically, the national football sphere, like the government sphere, has been dominated by dictator figures looking to exploit, as much as maintain, the success of the team. Between the shoddy preparation for 1966 and the shambles made of the 1998 Ronaldo health-scare, Duarte has only bad things to say about the CBD; ‘Brazilian management has been historically flawed in its organisation and structure.’ One of the best features of Shocking Brazil is its discussion of the domestic game alongside the national game. Two of Duarte’s most prominent themes run parallel with good reason: the mass exodus of talent to Europe, and the Seleção’s abandonment of ‘The Beautiful Game’ following the 1982 post-mortem. With the notable exception of Neymar, the Campeonato Brasileiro has been severely weakened since the ‘Dunga Era’. As Gilberto Silva, one of the numerous high-profile contributors, concludes,’It is unacceptable that in the 21st century we still have clubs run so poorly.’

And on top of the weight of all this incompetence, dishonesty and greed, is the expectation of a population of 200 million people. ‘A third consecutive failure in the World Cup could have serious consequences for Brazil’, Duarte predicts ominously. In many respects, Shocking Brazil reads like a very handy ‘what to expect’ guide for World Cup 2014, where the Seleção have the additional pressure of home soil for the first time since the disaster of 1950. High-profile omissions, patchy form, a lone superstar; all familiar factors. After Thursday’s unconvincing 3-1 victory over Croatia in the opening match, Hugh McIlvanney wrote, ‘Improvement can be expected but greatness seems out of reach’. A goalless draw against Mexico suggested even progress might prove slow. As in 1998, 2006 and 2010, Scolari’s team seems unlikely to set the world alight. And as in 1966 and 1974, Brazil are up against European sides like Spain and Germany that will know their style and show no fear. So will World Cup 2014 prove to be a sixth triumph or a seventh disaster?