On Thursday night, the Scottish capital played host to two giants of the Spanish football media. Calling upon their wealth of knowledge, experience and connections, Messrs Balague and Hunter compered a lively, entertaining evening of anecdotes and debate. Treating Messi’s emergence as the catalyst in a major turning point in Spanish football, they traced the fascinating Barcelona journey from Cruyff to Luis Enrique, taking in Laporta, La Masia, Ronaldinho and Guardiola along the way. The second half of the show saw them field an array of questions from the audience. Suarez, Fabregas, Neymar, De La Peña, Van Gaal, Almeria: you name it, they discussed it. 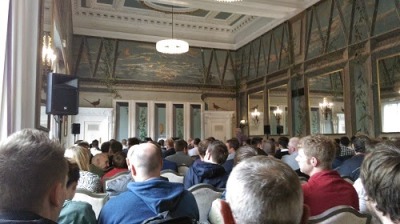 Afterwards, I caught up with the inimitable Graham Hunter, author of Barca and Spain.

Q. Thanks for your time, Graham. What a great event! You looked like you were having fun up there – how do you find talking about a book compared to writing it?

When you talk about something you’ve done, it does feel a bit embarrassing. You certainly do it to the best of your ability but I certainly don’t do it to garner appreciation. You do it intensely to try to communicate something. Since the first minute I’ve written about football, that’s what I’ve done. I remember it was an enormous surprise when anybody thought anything of what I wrote – you never lose that sense of something being worthwhile.

It’s not through any sense of false modesty that I say that I found the books really hard to do. I was trained as a newspaper man and it’s only subsequently that I’ve gone on radio and television. When you’re a newspaper man, you’ve got blank pages every day and part of the adrenaline is planning how to fill them, not just filling them with shite but working out what’s important, what’s a feature, what’s an interview, what’s a news story. Books take a fucking hell of a long time to come to fruition. I was saying to Guillem at lunch that he either assimilates facts more quickly or writes more quickly than me. I find it difficult.

When I talk on stage, it would be an outright lie to say it’s not a pleasure to talk to people about football all night, but you’re nervous. You watch a sea of faces and you’re worried, have they heard it before, am I being boring, do they feel like I’m repeating what they’ve already read? You worry about that. But when you connect with people because they ask you questions, then that’s untrammelled joy. Above all, what I come away with is the sheer joy of connecting with other people who feel the same about Spanish football as I do.

Q. The BackPage Press guys were saying that when they first approached you to do the Barca book you said no.

A thousand times! They spoke to me on the phone having read an article in The Sunday Herald about Xavi. They explained to me over and over again their passion about why they needed a book written about this subject. I said to them, ‘Everybody knows these stories, I’ve got nothing that people don’t know!’ The two things that convinced me were their persistence but above anything else, they told me ‘We’ve got this dream, we’ve started this company, against the odds, we’ve taken out a loan, we’re working part-time because we’re working as sub-writers for newspapers to finance the company. You’re the second book that we’ve asked anyone to do.’ Bascially, they suckered me into it! I didn’t believe I had anything new to say but now it’s been published in 13 or 14 countries, I was wrong and they were right. That’s the only time in my life I’ll say that about them!

Q. Where Guillem has focused on individual figures, you’ve focused on the team element. Do you feel each requires a different approach?

There’s no way to compare. I think he [Balague] is a lot shrewder than me. If you pick Pep and Messi, that’s extraordinarily astute. Both them and their entourages fully participated with him; he picked well. He’s also been more proactive in what he’s chosen. With BackPage Press, I’ve been led to my projects. Guillem has been sharper and good luck to him for that.

Q. In terms of that fascinating ‘access all areas’ approach to sports journalism, what advice would you have for someone looking to find their way?

Leave England. Things in Spanish football have become a little more closed than they were when I moved over, but England has a very closed football society. It doesn’t mean that players and managers don’t talk to journalists, because they do when they want them to write their books! In terms of the culture, of explaining their art and their philosophy, England is Neanderthal. It’s all about secrecy; you won’t be allowed in because you’re the enemy. Whereas in the advanced countries, there’s a symbiosis between football directors, managers, players and journalists. It doesn’t always work, it’s not always harmonious, but it does lead to more intelligent and open debate.

Q. If you could write a ‘behind the scenes’ biography on any footballer or football manager, past or present, who would it be?

I think the second Sir Alex Ferguson book is distinctly less well written and distinctly less well interpreted than the one he did with Hugh McIlvanney. So it’s very tempting to say Sir Alex Ferguson, from 1999 to now. But my ultimate choice would be Cruyff because I still believe that he’s the single most influential man in football ever – player, coach, football director, philosopher. Not all his ideas were original, but pound for pound he’s the most important personality.

Q. And finally, is there a next project in the pipeline?

There have been two suggested to me, but it would be naïve of me to share them with you. I would only accept one that was right for me because I’ve found these two tiring on top of my other work. Ollie Holt, Matt Dickinson, Henry Winter are exceptional at what they do, carrying on their work as brilliant frontline journalists and still writing well. I find it hard to do, so I’ll take my time in choosing.