Pep Confidential: The Inside Story of Pep Guardiola’s First Season at Bayern Munich 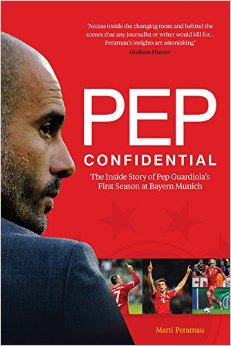 Having read Another Way of Winning, Guillem Balague’s biography of Pep Guardiola, I felt pretty familiar with The Philosopher and his work. But Martí Perarnau’s Pep Confidential is another level of intimacy entirely; where Balague offered a well-focused panorama of Barcelona 2008-12, Perarnau delivers the equivalent of Team Cam. Bayern Munich 2013-14 – one year, one team, one very special manager. This is unrestricted access of the kind Castel di Sangro gave Joe McGinniss, combined with intelligent insight of the kind Philippe Auclair provided for Cantona and Henry. Rarely, if ever, has one season been so intricately and rigorously explained.

The detail is extraordinary, if a little overwhelming. Pages and pages are dedicated to training regimes and tactical minutiae. Rondos, pivotes, the False Nine, zonal marking – like the Bayern players, the reader is quickly immersed in Pep’s football ‘language’. Numbers, too, feature heavily – the law of 32 minutes, 4 second pressing, 40m running, 15-pass moves, the 16 ‘starter’ squad, the defensive line starting 45m from goal. There is even a stat for the average amount of time Pep spends gesticulating during a game (70% in case you wondered). And then there are the formations, many of which Pep and his staff invent in the early hours of the morning like mad scientists: 2-3-2-3, 4-1-2-3, 4-2-1-3, the successful 3-6-1 and the disastrous 4-2-4. In November’s 3-0 win over Borussia Dortmund, Bayern move through four systems in one game.

As well as Pep Master Tactician, Pep Confidential also showcases Pep Master Man-Manager. When his head’s not buried in game plans and video analysis, Guardiola is busy ‘squeezing’ the talent out of his players, whether that be developing his protégé Pierre Højbjerg, massaging the egos of Franck Ribery and Arjen Robben, consoling the injured, or teaching important new roles to Javi Martinez and the pivotal Philipp Lahm (pun intended). As a result of this generosity of spirit, players are quick to buy into his ideas. Dissenters are few and far between, with Mario Mandzukic the only named rebel. Rather than a stubborn visionary, Pep emerges as an open-minded lover of the game, eager to learn from German football and vice versa.

Pep Confidential feels like the kind of dossier Guardiola himself would love to read about each and every team he faces: exhaustive, repetitive, obsessive to the verge of insanity. 120 pages in and the season is just starting in early August; 300 pages in and the season-defining defeat to Real Madrid is mentioned for the first time. Perarnau opens the book with Guardiola’s fascinating conversations with Grandmaster Garry Kasparov, and chess proves a very apt point of reference throughout. ‘Patience and passion. Guardiola’s two main weapons’ – for Pep, perfect football is tac-tac-tac (never to be confused with the dreaded tiki-taka) then pam!, deft midfield dominance leading to incisive, goalscoring chances. The one time he betrays this principle, his team are beaten 4-0 at home by Ronaldo and co. and knocked out of the Champions League. As Karl-Heinz Rummenigge puts it, ‘he deserted the middle of the pitch and opted for much more direct football’. On this occasion, Perarnau loudly condemns Pep’s choice of tactics, but then Guardiola has always been his own harshest critic.

As brilliant a portrait of Guardiola as it paints, Pep Confidential is perhaps most significant in its study of a team’s momentum over a season. Following on from the treble success under Jupp Heynckes, it’s a story of Bayern Munich trying to maintain focus and desire in the face of exhaustion and complacency. Hot on the heels of the joys of March, come the woes of April. As Perarnau concludes, ‘a team is a living entity, not a frozen image. It grows and flows, retreats and advances – a team is the sum of all its successes.’