Paul Dickov, Dean Windass, Clive Mendonca – you’ve gotta love the Football League play-offs. Richard Foster loves them so much that he’s written a very good book about them – The Agony & the Ecstasy (Ockley Books, 2015). The origins, the stats, the winners and the losers – they’re all there and more. I caught up with the Guardian journalist to talk all things play-offs.

1. At what stage did you decide to write the book and how did you approach Ockley about it?

I actually had the original idea about ten years ago. I had always been intrigued by the Play-Offs and following initial research was amazed that there was no book dedicated to telling the story behind them and so the journey started.

Having just finished my first book, The A-Z of Football Hates I had an offer from that publisher for the Play-Offs history but was introduced to Ockley by another author. I was impressed by Dave Hartrick’s enthusiasm, knowledge and most importantly, his emphasis on the quality of the writing.

2. What was the hardest part of the writing process?

Firstly, having written a fair chunk, around 20,000 words, I had my Mac stolen and stupidly hadn’t backed it up so that was a major setback. I could not go back to writing it for a year or two, as it was too painful. So that was a tough lesson learned – always back up your work.

Secondly, writing a history is a tough challenge as every year things change and I toyed with the structure for ages. The biggest decision was whether to go down the strictly chronological route or a thematic approach, in the end it turned into a mixture of the two.

3. There are lots of great tables, stats and infographics throughout the book. Was that the plan from the outset?

I must admit that I am a sucker for stats and I had always thought that a dedicated Play-Offs table would be a good idea. But it did take a lot of toing and froing between Dave Hartrick and myself to come up with the final formula and, as a Brighton fan, he was not especially enamoured by the idea of Palace being the top Play-Offs team.

The infographics are the work of design genius, Mick Kinlan, who did an amazing job transforming all the facts that I dug out about each and every club that have competed in the Play-Offs into such a visual feast. My personal favourite is the Bristol clubs being linked by the Clifton Suspension Bridge. Class. 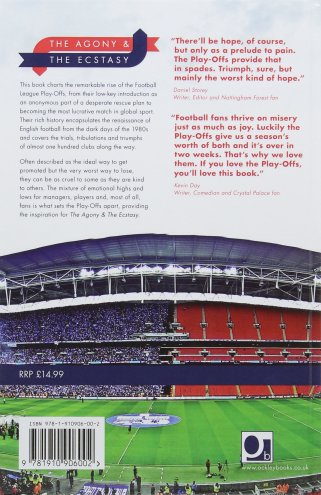 4. There are lots of insightful contributions from player, managers and fans. Was it hard work collecting these or were people very eager to discuss the play-offs?

Almost universally everyone I approached was more than willing to be interviewed about the Play-Offs and could recall the minute details of their experiences, which convinced me that this was a worthy topic for a book. There was one manager, who shall remain nameless, who asked for money to be interviewed, suffice to say, he is not included in the book.

5. Putting aside your beloved Palace, what is your favourite play-off memory?

There are so many to choose from but as a neutral I would have to say that the Huddersfield Town Sheffield United penalty shoot-out in 2012 League One Final takes some beating. Uniquely, all twenty-two players took a penalty and the last one by Steve Simonsen was perhaps the most inglorious failure and dramatic and heart-breaking ending of them all.

6. What are your predictions for 1-6 in the Championship this season and who do you think will win the play-offs?

Middlesbrough, Hull, Burnley, Brighton, Sheffield Wednesday and Ipswich. Fate decrees that Brighton will win the Play-Offs this year as consolation to my publisher for having to stomach Palace topping that Play-Offs table.

7. Would you be in favour of a Premier League play-off for the fourth Champions League spot?

I am with Sir Alex Ferguson on this one, which is not a phrase I use that often. I think it would be a little too artificial and considering the bleating that goes on about too many fixtures for the top clubs this would add fuel to the fire.

I like the fact that the Play-Offs give the Football League clubs the stage upon which to showcase the excitement and drama of their season finale. All eyes are focused on the lower divisions for those Finals and that is a good thing that should be maintained.

You can buy The Agony and the Ecstasy here