‘Make his/her face as big as possible – that’s what sells!’ That, I imagine, is a reoccurring comment in publishing houses around the world. I doubt a designer’s eyes have ever lit up at the words ‘Football book’ but the likes of Ronald Reng’s Matchdays, Raphael Honigstein’s Das Reboot and Jonathan Wilson’s Angels With Dirty Faces show what a bit of thought and effort can achieve.

So what about (auto)biographies? What can be done to spice things up, to make the often forgettable contents within that bit more bearable? I’m no expert but here are a few things to consider:

1. Action Shots
Lionel Messi is a footballer – he plays sport on a pitch wearing either the light blue and white stripes of Argentina or the azulgrana of Barcelona. I don’t know about you but I don’t want to see him posing in the locker room wearing plimsolls. 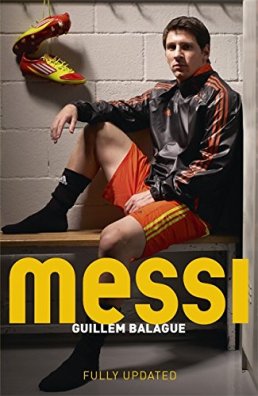 Duncan Ferguson was a footballer – he played in blue for Everton and loved shouting at everyone, including referees.

2. Colour
I’m all for a bit of black and white when it comes to classic players like Pirlo and Bergkamp. But you know it’s gone too far when Keith Gillespie is getting in on the act.

The halfway house is a horrible beige. They might suit the supermarket shelves but Rio and Stevie have never looked so dull.

I’m pretty sure I’ll never read Didier Drogba’s autobiography but at least it looks a little enticing (although back to my first point about his outfit).

3. Fun
This might not suit every player but it’s perfect for the likes of Bullard, Parlour and Dudek. Sometimes you’re just looking for some good stories and a bit of a laugh.

4. Not Just a Pretty Face
Sometimes (Keith Gillespie, for example), it’s not all about the looks. It’s about the bigger picture, and Big Sam means business.

Here’s where we step into uncharted territory. What if we took a picture of a player in action and added some tasteful, colourful flourishes like you would see on most other books? I’ll leave you to ponder that.