The Agony and the Ecstasy: A Comprehensive History of the Football League Play-Offs 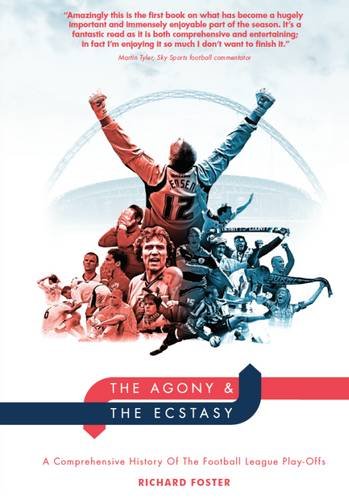 I have a vivid memory of sitting glued to the 1998 First Division play-off final. As an entitled Premier League fan, I knew nothing about either team but I soon declared my allegiance. I chose Charlton – Richard Rufus, Saša Ilić, Clive Mendonca – and cheered with glee as they beat Sunderland on penalties after an incredible 4-4 draw. The play-offs were an alien concept to me but I was sold straight away on the downright drama. It never crossed my mind that they might only be as old as me.

The Agony and the Ecstasy by Richard Foster is ‘A Comprehensive History of the Football League Play-Offs’. As the Martin Tyler endorsement on the front cover suggests, it is amazing that this is the first book on the subject. ‘Nerve-shredding, gut-wrenching tension’ tends to be a popular choice for literature, as do heroes, villains and financial gain. The Championship play-off final is now the single most lucrative sports match in the world, with £134 million resting on it. Mistakes are costly and goals are glorious.

The Agony and the Ecstasy begins its journey in the mid-1980s with the Heathrow Agreement, where the play-offs were included as a temporary, American-inspired measure to offset changes in the Football League structure. From this inauspicious start, few could have foreseen the role that they would have as a ‘significant catalyst in the rebirth of the game’. The play-offs offered something positive and engaging for an English public disillusioned by a spate of football-related disasters. Where before seasons had petered out for most teams with months to go, suddenly there was cause to hope and strive until the death. As Foster puts it, the play-offs offer ‘a much more varied tale of success and a distinctly fresher feel’.

The book goes on to chart the relatively few changes over the years – the rejection of the inter-division model, the shift to a one-leg final, the move to Wembley – and also to discuss the seismic impact of the Premier League boom and broadcasting revenues on the fight for promotion from the Championship. While the financial figures showing the widening gap between the top flight and the lower leagues aren’t particularly new, the particulars of the £134 million payment plan make very interesting reading, as do the increasing parachute payments for relegated teams.

In most respects, The Agony and the Ecstasy is incredibly comprehensive. There are 200 pages of dense text, plus an array of graphs, tables, photos and statistics. The book is a trivia buff’s dream. The level of research is excellent and the infographics are a fun, creative way of presenting the facts. While the Championship play-offs receive the most attention, Leagues One and Two are far from ignored. Foster makes good use of original cameos from the likes of Tony Cascarino, Steve Claridge and Ian Holloway, as well as extracts from autobiographies and memories from club bloggers.

The only aspect that seems underdeveloped is the actual match coverage. The structure of the book – ‘part chronology and part thematic’ – leads to repetition, with several sections labouring over the same points: the special nature of the play-offs, the contrasting fortunes for players and fans, and the rise of the play-offs coinciding with the decline of the FA Cup. More economy here could have allowed more room for ‘The Clubs: The Cursed, The Blessed, The Unfortunate and The Blighted’, the brilliant final section of the book that explores a selection of the best and worst team records. It would be nice to read more about the best games, the best goals, the best and worst individual performances – perhaps these could feature in a second edition.

Foster’s conclusion that the play-offs now represent ‘the true climax to the season’ and the ‘most successful innovation in post-war football’ is well argued throughout. Their impact and legacy are difficult to dismiss. However, as a history of the play-offs, The Agony and The Ecstasy too often tells of the drama and spectacle, rather than really showing it.