On a slope above Newcastle city centre there was a stadium called St James’ Park.

In the stadium there was a football pitch. On the football pitch lived ‘The Magpies’ and their tricky winger Mr Ruel Fox, ‘the best player in his position in the country’ according to his manager, Mr Kevin Keegan.

Every Saturday before kick-off, Mr Fox would say to Mr Keegan, ‘Well, my darling, what shall it be this time? A mazy dribble down the wing past the full-back? A cross to Mr Rob Lee? A pull-back to Mr Peter Beardsley? Or a thunder blaster of my own?’ And when Mr Keegan had told him what he wanted, Mr Fox would creep out onto the pitch at St James’ Park and help himself.

The defenders knew very well what was going on, and it made them wild with rage. When he played for Norwich City, even Bayern Munich couldn’t stop Mr Fox.

So what could decidedly average Premier League defenders do about him? Kenny Cunningham, Des Lyttle and John Wark were not men who liked to give anything away.

But Mr Fox was too clever for them. When Wimbledon came to town, the harsh North-Eastern winds carried the smell of Cunningham to Mr Fox’s nose as he twisted and turned towards goal. He quickly changed direction and slammed a pile-driver into the top corner. Goal!

‘Dang and blast him!’ cried Cunningham.

‘I’d like to rip his guts out!’ said Wark. ‘How on earth can we stop the blighter?’

Lyttle picked his nose delicately with a long finger. ‘I have a plan,’ he said.

‘Well, my darling,’ said Mr Fox. ‘What shall it be tonight?’

‘I’d like another goal please,’ said Mr Keegan. ‘Now do be careful – you know they’ll be waiting for you.’

‘I can smell those goons a mile away,’ said Mr Fox. ‘Don’t you worry about me.’

But in the first half, Mr Fox barely got a sniff of the ball. Mr Andy Cole had moved away to Manchester United and so The Magpies needed goals, goals, goals. New signing Mr Keith Gillespie wasn’t going to get many; Mr Keegan was relying on Mr Fox, even if he did wear the Number 5 shirt. But whenever he cut inside, Lyttle was there to stop him and he had help from his midfield. His plan was working.

In the second half, Mr Fox inched forward a little more. He passed the ball from the left wing to the right wing and made a clever run into the box for the cross. He wasn’t the tallest but Lyttle wasn’t prepared for his leap. Mr Fox’s header crept past the goalkeeper. Goal!

‘Dang and blast!’ said Lyttle, putting his hands on his head. ‘I should have just fouled him the moment he came out on to the pitch.’ 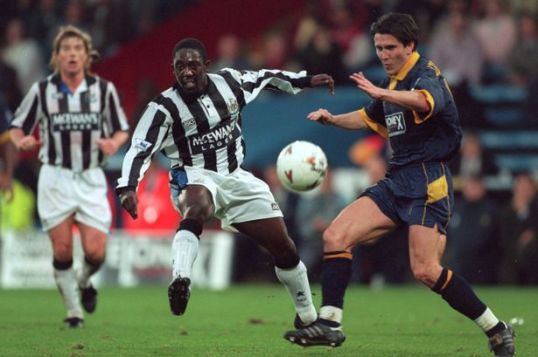 ‘I’ll tell you what we don’t do,’ Wark told his teammates as they walked out to face The Magpies. ‘We don’t let him go!’

‘Did you hear that, Mr Fox!’ yelled David Linighan. ‘It’s not over yet, Mr Fox!’

The Ipswich defenders were about as nasty and mean as any moustachioed men you could meet. On the touchline, Mr Keegan began to cry. He gathered his substitutes close to him and held them tight.

Suddenly there was an especially loud crunch as Wark sent Mr Peter Beardsley flying through the air. The sight of this awful thing seemed to have an electric effect upon Mr Fox. ‘I’ve got it!’ he shouted. ‘Nobody in the world is as deadly from long range as a Fox!’

Mr Fox pretended to take the free-kick but it was Mr John Beresford who swung the ball into the box. Yallop cleared but it fell straight to Mr Fox. In a flash, he sent another thirty-yard screamer flying towards the top corner. Goal!

After the match, The Magpies sat down, panting for breath. Mr Keegan said to them, ‘If it wasn’t for Ruel, we might have lost that game. Ruel is a fantastic Fox.’

Meanwhile, outside St James’ Park, the defenders were all very tired and cross.

‘Whose rotten idea was that?’ asked Cunningham as they watched the highlights on Match of the Day.

‘It was a good idea but we weren’t good enough,’ said Wark. ‘There’s only one thing to do – starve him of the ball.’

‘No, that’s just what they want him to do,’ said Mr Keegan.

‘But we’re so hungry for goals!’ Mr Paul Kitson cried. ‘How long will it be till we get a decent cross?’

Mr Keegan had no answer to give.

‘How long can a Fox go without touching the ball?’ Wark asked the other defenders.

‘Not much longer now,’ Cunningham told him. ‘Keegan took him off at half-time against Tottenham. I hear he’s thinking about bringing in some foreign flair for next season.’

At St James’ Park, The Magpies were slowly but surely dropping down the Premier League table.

Mr Fox had not spoken for a long time. Mr Keegan knew that he was trying to think of a way out of their slide. Suddenly, as they prepared for the final game of the season, there was a little spark of excitement dancing in Mr Fox’s eyes.

Mr Darren Peacock dribbled forward from defence, with his luscious locks flowing in the North-Eastern wind. Then he passed to Mr Fox, who was just inside the Crystal Palace half.

The defenders had told Gareth Southgate how to stop Mr Fox but when he was at his mazy, jinky best, it was impossible to stop him. As Mr Fox cut inside, a Palace player flew in for the tackle but he was too late. Mr Fox shot for goal and it cannoned off a Palace player and looped over the goalkeeper’s head. Goal!

He let out a shriek of excitement and punched the air. ‘I’ve done it!’ he yelled. 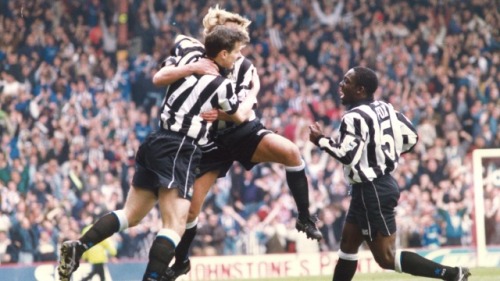 ‘Oh, what a fantastic Fox you are!’ Mr Keegan told him at full-time.

But soon lovely Mr David Ginola arrived at St James’ Park and Mr Fox had to move away to ‘The Spurs’ in London.

‘There’ll be plenty of goals to go round, I can assure you,’ said Mr Fox.

When Nottingham Forest came to White Hart Lane, Little was waiting for Mr Fox. He refused to let him escape and The Spurs lost 1-0.

When The Spurs travelled to Wimbledon, Cunningham was waiting for Mr Fox. For 85 minutes, Cunningham starved him of the ball but right at the end, Mr Fox crept in to steal the win for The Spurs.

At the post-match meal, Teddy stood up. ‘A toast! To our dear friend who has saved us this day – Mr Fox!’

‘To Mr Fox!’ The Spurs all shouted, standing up and raising their glasses. ‘Long may he live!’

Then Mr Gerry Francis, their manager, got to his feet. ‘I just want to say one thing, and it is this: RUEL IS A FANTASTIC FOX.’

After a few great years, Mr Fox moved on to West Brom and then to the Montserrat national team. He is now retired and runs Ipswich Bootcamps.

Cunningham, Little and Wark joined Masters Football, waiting for Mr Fox to return. And as far as I know, they are still waiting.