Above Head Height: A Five-a-side Life 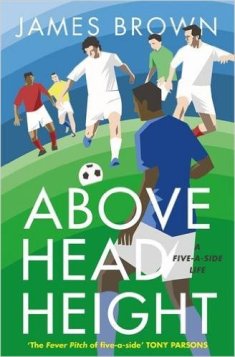 It’s a pretty clear sign that something has really caught on when people are writing memoirs about it. Five-a-side football has never been so popular and it just keeps growing. At this rate, the 2020-21 Premier League season will be played at Power League venues with head height rules. In these boom years, former NME, loaded and GQ journalist James Brown’s book Above Head Height: A Five-a-Side Life arrives with plenty of press attention and a Tony Parsons quote calling it ‘The Fever Pitch of five-a-side’.

Inspired by the death of James Kyllo, his friend and football organiser, Brown wrote a brilliant Telegraph piece last year called ‘Goodbye, my five-a-side friend’. That really struck a chord with the nation and so now, here is Above Head Height, his full-scale exploration of five-a-side football – the players, the psyche, the phenomena. The coverage is comprehensive, with chapters on everything from the history of commercial five-a-side to the various temper types found on the field. Haribo, colonic irrigation, Tony Yeboah – you’ll find it all here.

Above Head Height contains a neat blend of personal nostalgia and universal truths, as well as collected anecdotes from the likes of ‘Orrible Ives, the result of a clever call to social media. Brown brings it all together with passion, self-deprecation and, importantly, humour: ‘Fat people were old, thin people were young and fat young people were goalies’, ‘the no-weather pitch’, ‘any adult who arrives for a five-a-side game in plimsolls could well be a nutter’. Warning: the observational quips about black pellets in shoes, odd kit and getting fat may wear a little thin for the 1% who don’t love Michael McIntyre.

For all the fun football tales in Above Head Height, Brown is arguably at his best when describing the human, emotional side of the five-a-side obsession. He writes powerfully about his own recovery from addiction, the ‘loop of life’ that sees young men becoming dads and their sons becoming young men, as well as the strange relationship that exists between teammates who often don’t ever see each other in normal clothes. ‘I think you can learn more from playing football with someone for an hour than by talking to them or working with them for years,’ one of his teammates tells him.

Like your classic five-a-side player, Above Head Height deserves a lot of praise but there’s always room for a moan or two. Early on, Brown talks about ‘the howling gale of distraction that makes up my head’ and at times, the writing does feel unstructured. ‘What Are We Doing When We Play Five-a-side?’ one chapter begins and after thirteen pages of swirling ideas, it ends ‘In short: we play five-a-side football because we like it.’ A clearer, thematic approach works better in chapters like ‘On The Subject of Violence’ and ‘Shorts, Socks and Coats’.

As I read – and greatly enjoyed – Above Head Height, I couldn’t help thinking it might have been better as a smaller, more focused book of amusing, themed, five-a-side essays, reminiscent of Daniel Gray’s recent book Saturday, 3pm. Wishful thinking, I know, just like James Brown scoring goals like Allan ‘Sniffer’ Clarke.